Really? On An American Coin? Really? 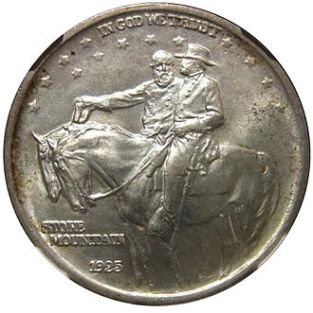 The Ramones: The KKK Took My Baby Away
[purchase]

It seems like a million years ago, although it was only in June, 2015, that a white supremacist terrorist killed 9 people in a church in Charleston, South Carolina.  The killer’s love for the Confederate battle flag led to an actual public debate on the place of that racist symbol of treason in official public life.  Shortly thereafter, the governor of Alabama removed four of them from the state capitol, and the following month, the South Carolina legislature voted to remove its symbol of the Civil War losers from the state house grounds.  A number of major retailers stopped selling the thing, and calls started to be heard to remove the names of Confederates from government and private buildings.

Even before the Charleston massacre, I wrote a piece at Star Maker Machine decrying the official glorification of the Confederacy, because, in my view (and that of others) those who took up arms against the government, or supported those who did, were traitors, not heroes.  I discuss this in more detail there, and won’t repeat it here, except for this excerpt, which summarizes some of the ways that the vanquished have become lionized:

throughout the South, Confederate politicians, generals and other “heroes” are honored with monuments, school names, and maybe most egregiously, by the Federal Government with at least 10 Army bases named for generals who took up arms against the very forces that now honor them (and in other inexplicable ways). President Obama, the country’s first African-American president (whose wife’s maternal great-great-great-grandmother, Melvinia Shields, was a slave) has even sent a wreath to be laid at the Confederate Memorial in the Arlington National Cemetery (on land that was formerly Robert E. Lee’s home, and which is bordered by the Jefferson Davis Memorial Highway), despite a petition signed by many prominent historians urging him not to do so. To again reference petition signer Professor [James] McPherson, “I don’t think it appropriate for a president to send a wreath honoring a group that tried to break up the United States.”

Unfortunately, as The New York Times reported earlier this month,  the “Momentum to Remove Confederate Symbols Slows or Stops.”  Of course it did.  Not only do most of us in this country have a short attention span, but the pro-Confederate flag forces are powerful, especially in the South.

My parents are in the process of downsizing and are packing up their stuff in preparation for moving to a smaller house.  The other day, my mother gave me a box of coins, mostly silver Kennedy half-dollars, that she had gotten from her parents.  But included in the box was the coin pictured above featuring Robert E. Lee and Stonewall Jackson.  I’m going to admit that in my youth, I was a coin collector, an activity that was not the first uncool thing I was interested in, nor the last.  And nerd that I am, I’ve maintained a low level interest in things numismatic.

Despite that, I had never heard of or seen this coin, but a few seconds on Wikipedia uncovered that it is the Stone Mountain Memorial half-dollar, minted by the United States government in 1925.  The whole story behind the coin is stunning, but to me, the most remarkable things are: (1) that the federal government would mint a legal tender coin for the purpose of raising money for a memorial to the Confederate cause and  (2) that the designer of the coin, Gutzon Borglum, and many others involved in creating the Stone Mountain Memorial and the coin, were members of the then-newly resurgent Ku Klux Klan (which had been re-founded at–yep, Stone Mountain, Georgia).

OK–that’s not really true.  What is most remarkable about that coin is that it bears the following motto:  “Memorial to the Valor of the Soldier of the South.”  You remember those soldiers–the ones who killed the soldiers defending the United States government, fought to break away from the United States and defended the institution of slavery.  Those guys get a coin.  But 1925 was, as one of my Civil War historian friends has pointed out, the “apex of the ‘both sides were noble patriots’ and ‘Reconstruction was a tragic mistake’ bullshit.”  Replace Jackson and Lee with, say, Rommel and Jodl, and “Solidier of the South” with “Nazi Soldier” or replace them with bin Laden and al-Zawahiri and “Jihadi Soldier” and the absurdity of this coin becomes more apparent.

It turns out that for every three dollars of revenue brought in from the half dollars, two were paid out in expenses, and only 27 cents of each dollar went to actual carving of actual traitors.  So, it appears that the U.S. Government probably minted this coin more for the personal benefit of a bunch of Klan members or sympathizers than to help create a memorial to people who fought against it.  This debacle led, in part, to a bit of a scandal that sadly did not torpedo the project–instead, it was taken over by the State of Georgia and completed in 1972, using a new design by a non-Klan affiliated sculptor. By the way, the original sculptor, Borglum, also sculpted a bust of Lincoln, a statue of Union general Philip Sheridan, and a little thing called Mount Rushmore.  He also named his son Lincoln, all of which seems nonsensical by modern standards, considering Borglum’s position as one of the six knights who sat on the Klan’s “Imperial Koncilium” (really) in 1923, but maybe not by the standards of his time.

Speaking of short memories, just over a month ago, “short fingered vulgarian,” Donald Trump first expressed a lack of recognition of his supporter David Duke , the former Grand Wizard of the Klan (although Trump had referred to Duke by name as a Klansman back in 2000), which somehow still exists, and then was forced to disavow the endorsement.  And, probably not surprisingly, the Times reported that polling data indicated that “70 percent of Mr. Trump’s voters in South Carolina wish the Confederate battle flag were still flying on their statehouse grounds. . . . The polling firm says that 38 percent of them wish the South had won the Civil War,” and that “[n]early 20 percent of Mr. Trump’s voters disagreed with Abraham Lincoln’s Emancipation Proclamation, which freed slaves in the Southern states during the Civil War.”  Let that sink in for a second.

I have promised to link every post here to music, so other than the Drive-By Truckers songs that are discussed in my Star Maker Machine post mentioned all the way at the start of this post, I’ll point out that there are many songs that mention the Klan, including this Byrds tune, memorably performed by Joan Baez at Woodstock, this ironic blast by the almost forgotten Bus Boys, this Woody Guthrie song done by Billy Bragg and Wilco which relates to Klan riots against Paul Robeson in Peekskill, New York (!), and this Dead Kennedys dystopian fantasy.

But instead, our featured song is from The Ramones, the facially silly “The KKK Took My Baby Away.” There appear to be almost as many interpretations of the actual meaning of this song as there are Ramones, but it is, like many of their songs, catchy and great.

5 Responses to Really? On An American Coin? Really?