In Praise of Diners, Drive-Ins and Dives. Really. 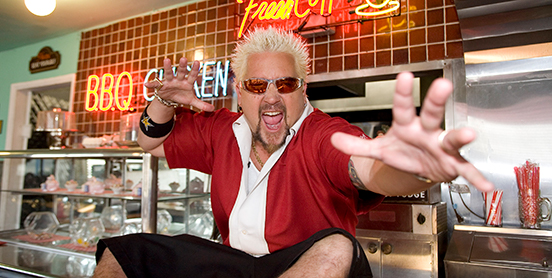 I know that I should be writing about the wave of protests sweeping the country and the underlying systemic racism that has burst into mainstream consciousness, but who wants to hear about that from a middle-aged white guy without any particular expertise on the issue? (Much better, I think, to read and learn from the experts, right?)  Or I should be writing about our horrific president and his gang of fascist-wannabe enablers, but I’ve done that, and I don’t have anything new to add that hasn’t been said better elsewhere.  Or, maybe I need to write a review of Jason Isbell’s excellent new album, Reunions, but considering that it was recently the number 1 album on most of the relevant Billboard charts, and has been reviewed everywhere, I’m not sure what new insights I have  (It’s good.  Not Southeastern good, but that’s a damn high bar).

So, instead, let’s talk about the television equivalent of the most comforting of comfort foods, Diners, Drive-Ins and Dives.  I’d argue that during this period of home sheltering and increased binge watching, “Triple D” is the perfect way to pass time.

If you haven’t seen the show, in basic form, the host, Guy Fieri, shows up in cities and towns around the country (and occasionally Canada and overseas), usually pulling up in a red Camaro convertible, visiting restaurants that roughly fit into the three titular categories.  In reality, most of the places are pretty nice looking, or at least interesting, and all have what appears to be tasty food.  He doesn’t show up at the basic diner, for example, only one that is doing something above and beyond the standard fare.

The show highlights mostly moderately priced restaurants making quality food, often from scratch and from local ingredients, and almost always owned by small business people, many times friends or families.  In other words, food that is financially available for a good number of people, prepared with care, and which is worth choosing over lesser options, including large chains, which he avoids.  Yes, sometimes he shows food that is over the top, but not nearly as often as a bunch of other shows on the Food/Cooking channels, or other similar outlets (I’m talking about you, Carnival Eats, Man vs. Food, and Food Paradise, among others), and he often highlights healthier options, if that’s what you are interested in.

Guy is effusive in his praise, often using his own particular slang, and his enthusiasm and positivity is fun, and in these dark times, enjoyable.  Not to mention, since it has been a long time since we’ve been allowed to sit in a damn restaurant, there’s both a nostalgic and an aspirational quality to the show–“I remember when I could go out to a place like that, and I can’t wait to do it again.”  It’s easy to sit back on the couch and enjoy the variety of interesting places, hard-working and talented owners and chefs, and food from every cuisine around the world (and unusual fusions, too).  And because there seem to be an unlimited number of episodes, you can kill a lot of time, and remarkably, despite the formula the shows don’t get repetitive, because there are so many different types of food and so many types of people.

So, we need to talk about Guy Fieri.  Does he look silly?  Sure.  Is there any reason why anyone should bleach their tips and wear their sunglasses backwards like he does? Of course not.  Do I like his choice of music?  No.  Is he a great chef or restaurateur?  I have no clue, because I’ve never eaten in one of his restaurants, but at least one famous review says no.  But that doesn’t matter.  Because for this show, he just needs to be a good host who is knowledgeable about food. And by all indications, he’s really a good guy (pun intended).  Of course, we don’t know if the private Guy and the public Guy are very different, but it really seems unlikely.  Although the original creator of the show, who was ousted in an acrimonious split, has alleged that Guy made misogynist, homophobic and anti-Semitic remarks during filming, this has been denied, never proven, and speaking as a litigator, could simply be sour grapes.

Let’s start with the fact that he appears to be a devoted family man.  Despite the amount of time he must spend on the road, he has clearly made time for his wife and kids, all of whom have appeared on the show (son Hunter, especially), not to mention his parents and many other relatives.  He’s also very charitable.  Here‘s an article from 2018 discussing, among other things, his charitable work, and here‘s one discussing the many millions of dollars he’s raised for the restaurant industry and its workers to help survive the COVID crisis.

I’ve also seen him act as a mentor to contestants on The Next Food Network Star, the show that initially launched him to stardom.  In most (every?) season, there’s a challenge requiring the contestants to shoot a mock segment where they visit a restaurant, meet the chef and discuss the food.  In other words, a Triple D type segment.  And despite the number of shows he produces and stars in, and all of the restaurants he’s involved in, Guy is often there to walk the newbies through the process that he has mastered.  At least based on the edited cut that we see, he does it with skill, tact, empathy, and constant support.

Plus, getting the Triple-D seal of approval is usually a boost for these small, local businesses–they often return to restaurants featured on the show to find that business has skyrocketed, and the owners have often expanded their original locations, moved to larger quarters or opened more restaurants.  I’d argue that’s a good thing, especially since even before the COVID crisis, the restaurant business is hard to survive in.  And he genuinely seems excited to support places that create the food that he spotlighted.  As one restaurant owner, Griffin Bufkin, recounted in that last article:

Exactly one month after filming our episode, our entire restaurant burned to the ground,” Bufkin said. “And one of the first people to call us — while the place was actually still on fire — was Guy Fieri. He wanted to see how we were, if he could help, but overall just to encourage us to get back on our feet.”

I’d be remiss, though, if I didn’t point out the well-known feud between Fieri and another celebrity chef/restaurant guide, the late Anthony Bourdain.  Not surprisingly, Bourdain, a supremely talented writer and host with a deeply sarcastic and dark persona, denigrated Fieri’s sunny everyman approach and middlebrow persona, in pretty harsh terms.  I’m sure that it didn’t help that Fieri isn’t a trained chef–his degree is in hospitality management.  Fieri, clearly stung by this, the way that your basic high school kid might be annoyed by the disdain from the “cool kids,” held his tongue for years before responding.  Check out this article for a “deep dive” into their feud.  It’s silly, though.  There’s value in both of their approaches.  Sometimes you want haute cuisine; sometimes you want a well-executed chili dog.  Sometimes you want to read something challenging; sometimes you want an engrossing beach novel.  Fieri seems to have a much better relationship with celebrity chef and TV host Andrew Zimmern, who also was close to Bourdain.

I always know that when I watch Diners, Drive-Ins and Dives, I’m going to be entertained, and likely become hungry–and sometimes inspired to try to cook something that I saw on the show.

Our featured song is Martin Sexton’s “Diner,” from his 1996 album Black Sheep, both of which are long-time family favorites.  It glorifies the classic American diner, maybe not the kind of elevated place that would appear on Fieri’s show, but one that locals love for its consistent food (and interestingly, the type of place that Bourdain might have liked for its lack of pretension).  Sexton is an incredible songwriter, and is a riveting live performer both vocally and on guitar, so try to see him when we can do that again.  You can read a little more about Sexton and this song here.