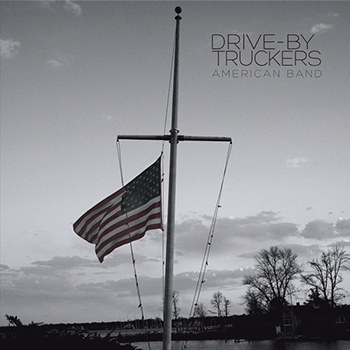 In this politically charged time, Drive-By Truckers have released a politically drenched album that doesn’t forget to rock.  American Band is an incredibly powerful political statement communicated through propulsive songs filled with poignant and thoughtful lyrics.  It is an album that grabbed me immediately and has held on–the last one that did that in the same way was former Trucker Jason Isbell’s Southeastern, but for different reasons.

The Truckers have long been one of my favorite bands.  At their best, their songs are able to appeal to both your brain and your gut, sometimes addressing issues of politics, race and personal relationships directly, and other times, more subtly, through finely observed stories.  It is almost obligatory in writing about the band to reference their breakthrough, Southern Rock Opera, for its ambitious attempt to come to grips with what co-founder Patterson Hood calls “the duality of the Southern thing.”  That album didn’t shy away from politics, but it appropriately focused on Southern issues, particularly the civil rights movement and George Wallace.

Since then, although they haven’t shied away from both direct and indirect political songs, the Truckers have never gone as all-in as they have with American Band.  And while they continue to analyze the “Southern thing,” their vision has widened to address national issues including race, gun violence, political division, mental health and changing gender roles.  Which you might expect from good songwriters, as they grow and broaden their experiences. Although American Band continues to be grounded in the Southern rock that is the basis for their sound, it also is filled with other influences such as the Clash, the Stones, the Replacements and Springsteen,  who the Truckers grew up listening to, as much as, if not more than, Lynyrd Skynyrd.

The mainstream press is taking notice. The Truckers are the main focus of a long Sunday piece in The New York Times headlined “Southern Bands That Are Politically Progressive, and Proud of It,” which summarizes the album:

From police treatment of African-Americans to the current presidential election, the issues roiling America today have led the Truckers to drill down on the topic that has preoccupied them for 20 years — the South — while bringing a relatively unheard perspective to pop music’s discourse: that of the progressive white Southerner.

The Washington Post referred to the album as “vitally important.”  The title of Esquire‘s article, “How Drive-By Truckers’ American Band Reclaimed Rock For the Anti-Trump South,” signals its position on the album:

Now, on the eve of a incredibly bitter election, and in the thick of a tumultuous time in American history that rivals the one that saw its close just before the Drive-By Truckers themselves solidified their personalities, beliefs, and identities, American Band is an important record that offers an anxious view of the future, an uneasy look at the past, and a contemptuous vision of our present that is as emotionally gut-busting as it is musically.

Slate asserts that “The Drive-By Truckers’ American Band Is the Perfect Album for the Year of Trump.” NPR’s review recognizes:

There’s little ambiguity in these songs. They’re blunt in the tradition of Neil Young. And the conviction goes beyond the messages. Everything is delivered with scalding intensity.

an aggressive, punk-fueled protest record that addresses topics ranging from the NRA and racially-motivated police shootings to immigration and the ugly legacy of the Civil War. Nearly half of the album’s 11 songs deal with gun violence.

A politically supercharged collection of songs by one of America’s most consistently rewarding bands would be welcome in any year, but Drive-By Truckers’ American Band is all the more valuable at this fraught moment. Imagine a rock’n’roll record featuring staggering songs about the Black Lives Matter movement (“What It Means”), school shootings (“Guns of Umpqua”), the Mexican border (“Ramon Casiano”), slut-shaming (“Filthy and Fried”), depression (“Baggage”), and political chicanery (“Kinky Hypocrite”) all played with shaggy barroom abandon; now imagine that the album is made by a bunch of unapologetically Southern American white men, the kind of “blue-eyed Southern devils” a century of stereotyping has trained liberals — everyone, really — to mistrust.

To me, the thematic centerpiece of the album is Hood’s “What It Means,” which I first heard live last summer at a free show in New York, at the Brookfield Center, which was known as the World Financial Center when it was nearly destroyed on 9/11.  Performed on a stage essentially lacking decoration, except for a “Black Lives Matter” sign, it is a powerful song, addressing the shootings of Michael Brown in Ferguson and Trayvon Martin in Sanford Florida, specifically, and other similar shootings and more general issues of frayed race relations.  While Hood points fingers, stating:

But what the song really is about, I think, is that Hood is at a loss to explain “What It Means.”  I’ve read enough of Hood’s lyrics, interviews and writings to believe that he recognizes that artists can pose questions and raise issues, but cannot really answer them for everyone.  We often mock musicians and actors who purport to preach to us about what to think, because of their lack of knowledge of the issues or lack of expertise.  In fact, when Hood posted early lyrics to the song on his Facebook page, the reaction of his fans was mixed, and in many cases hostile.    Hood, and his fellow songwriter and band co-founder Mike Cooley, don’t claim to know the answers, but are smart and savvy enough to highlight their concerns and make incisive observations without hectoring.  In fact, in the album’s liner notes, Hood writes:

Finally, I have no definitive answers for any of these questions. All I know is the time has passed for burying our heads in the sand and not asking. So many of the problems of our time can boil down to a failure to communicate. To talk to each other. To ask the tough questions of ourselves. To open up our hearts and minds and seek a higher calling. To summon better angels, as they say. Or as the prophet Patti Smith said, to “Love each other, Motherfuckers.”

The song that has stuck in my head, though, is Cooley’s “Surrender Under Protest,” a scorching anthemic rocker that attempts to reclaim the title phrase from the purveyors of the Confederacy’s “Lost Cause” mythology.  Cooley, inspired by a period after the Charleston church shooting when the movement to remove the Confederate battle flag from public places, particularly the South Carolina state capitol,  briefly had momentum, condemns the continuation of this false narrative, but also despairs that the conflict won’t easily be resolved:

Does the color really matter?
On the face you blame for failure
On the shamin’ for a battle’s losing cause

Another standout track is the opener, “Ramon Casiano,” about the 1931 shooting of a 15-year old by by Harlan Carter, later a border guard and then NRA leader who led the organization to its powerful position.  Cooley describes Carter in the song, in language that likely was designed to also call to mind a modern orange-haired demagogue with a border fixation, as follows:

There really are no weak songs on the album–other favorites include Cooley’s great wordplay used to attack greedy religious leaders in “Kinky Hypocrite,” and Hood’s meditation on his Southern identity, even after he moved to Portland, Oregon, “Ever South.”

But maybe the most poignant song is Hood’s “Guns of Umpqua,” about the 2015 shooting of a professor and eight students at Umpqua Community College, a few hours south of Portland, a couple of months after Hood moved.  The song appears to be informed, if not based directly, on the story of Chris Mintz, an Army veteran who was a student at the college, and attempted to save and protect his fellow students.  Mintz was shot multiple times, but pleaded not to be killed on his son’s birthday.  The killer withdrew, and Mintz survived.  The song’s power comes not from an explicit anti-gun message, but rather from its carefully described recounting of the details of the ordinary joys of life–birds flying, the smell of paint, the morning caffeine surge, a camping trip with friends, birthdays–contrasted with the stark reality of using chairs to barricade doors and “being shot in a classroom in Oregon.”

I’ll give Patterson Hood the last word, from the album’s liner notes:

As a band, we have kind of straddled that line in what we do. Although our lyrics and politics have always tilted a ways left of center, our music has been rooted in deep traditions and a well of historic and literary influences. This record tends to lay these threads more bare than anything we’ve ever done.