Posted on January 1, 2018 by anotheroldguy 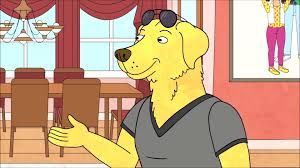 Let’s Active: Every Dog Has His Day
[purchase]

I have been a bad boy, not posting anything here for more than two months.  It’s not like there’s nothing interesting going on in the world, or in music, but maybe it has been paralysis by analysis.  There may be too much to write about, and trying to figure out what to focus on is too hard.

Also, I’ve been watching a bunch of TV.  There is so much good stuff available on the air, or streaming, these days, but the show that has really struck a chord with me has been BoJack Horseman.  For the last few years, I’ve seen TV critics rave about it, but somehow watching a cartoon about a talking horse just seemed too weird.  But when my daughter recommended it, and pointed out some ways that it would appeal to my particular sense of humor, we decided to give it a shot.

My wife and I binged watched the show over the past few weeks, and it has secured a place in my pantheon of great shows.  Although it is a cartoon, and it is at times hysterically funny, what makes BoJack Horseman such an amazing creation is its willingness to plumb deeply into the darkness of its titular character, the other characters, the meaning of celebrity, and ultimately, our society.  Its creation of a semi-coherent world inhabited by humans and anthropomorphized animals is so well done, that by the end of season 4, whole episodes, or large chunks of episodes, can be devoted to characters other than BoJack, without any dropoff in quality or interest.  In addition, the main cast is filled with great voice actors, including Will Arnett, Amy Sedaris, Allison Brie, Aaron Paul and Paul F. Tompkins, and the minor characters are voiced by actors such as Angela Bassett, Patton Oswalt, Keith Olbermann, Kristen Schall, Candice Bergen, Lake Bell, Wendie Malick, J.K. Simmons, Lisa Kudrow, Andre Braugher, Kristen Chenoweth, Olivia Wilde, Matthew Broderick, Alan Arkin, Jeffrey Wright and Kristen Bell.  Even better, a number of celebrities, including Jessica Biel, Zach Braff, Naomi Watts, Felicity Huffman, Paul McCartney, Lance Bass, David Chase, Daniel Radcliffe and Character Actress Margo Martindale (that’s how she is always referred to), appear as themselves, mostly in unflattering portrayals.

Because Mr. Peanutbutter is a Yellow Lab (from the Labrador Peninsula, portrayed as a paradise filled with dogs cavorting, chasing balls and catching Frisbees).  The show is not consistent about the ways that its animal characters act like animals (BoJack, for example, seems to have no horse-like attributes), but Mr. Peanutbutter has many traits of his species and breed.  He turns three times before getting into bed (which is a dog bed that he shares with a human wife).  He chases tennis balls, and has pictures of them, with bones and newspapers, on his wall.  When he is hurt, he wears a cone of shame.  And he is relentlessly friendly, positive, and a bit goofy.  Which doesn’t mean that he is perfect.  He’s been married three times (once, to Jessica Biel), his business savvy is questionable, he seems to lack empathy for others’ feelings, and he’s just not that smart.  Despite that, he has been both financially and professionally successful because he is willing to take pretty much any role, lacking BoJack’s ego or his desire to do something meaningful.

In Season 4 [SPOILER ALERT] Mr. Peanutbutter runs for Governor of California, in what has to have been an attempt to lampoon another yellow haired buffoon’s run for office.  The show takes some shots at the lack of scruples of politicians, the way media cover politics, and the willingness of voters to make their choices for stupid reasons.  But then, something happens–Mr. Peanutbutter realizes that his opponent, incumbent governor Woodchuck Coodchuck-Berkowitz (voiced by Andre Braugher with his best Captain Holt deadpan), is way more qualified for the job.  So, Mr. Peanutbutter steps aside and helps Coodchuck-Berkowitz defeat Jessica Biel, who entered the race after Mr. Peanutbutter withdrew.

Now, I liked Mr. Peanutbutter before he ran for, and then properly withdrew, from his run for governor. (And I’m not the only one.)  In these times, I think that an unceasingly loyal, optimistic, and positive character just appealed to me.  Sure, I’m not in love with the fact that his success was not based on working hard or paying dues, but when I turn on the TV or read the news every day and see the effect of ignorant, mean-spirited, greedy, and power-hungry humans on our country and the world, Mr. Peanutbutter’s sunny, friendly attitude made me happy.  And then, when he realized that he had no business running California, and graciously dropped out in favor of the vastly more qualified candidate, I saw a vision of how this country should have worked, and my Mr. Peanutbutter love just increased.

Of course, that’s not the way things shook out in 2016, and that led to a hard, tense 2017, with no real hope for improvement.  I recently criticized a friend on Facebook for taking the position that certain things would not be proven by the Mueller investigation, and I similarly cannot be sure that certain things will be proven, until the investigation is over.  We know that the Russians interfered with the 2016 election, and we know that people in the president’s family, inner circle and campaign were approached by and communicated with Russians, but whether it will lead to charges against anyone for this conduct, much less the president, is still, to me, an open question.  I have more confidence that wrongdoing will be found if Mueller, or others, are looking at financial issues, but again, I don’t know what the final result will be.  I know what I’d like it to be, though.

Our featured song is “Every Dog Has His Day,” the title track from Let’s Active’s forgotten gem of an album from 1988.  Let’s Active was a North Carolina band led by Mitch Easter, best known as the producer of R.E.M.’s early albums.  The band’s excellent earlier releases, like R.E.M. of the period, had a jangle-pop sound, but Every Dog Has His Day had a slightly harder, more power-pop edge.  As Allmusic says, the album “has all the earmarks of a major bid for mainstream appeal, which it should have achieved.”  But, it didn’t, and Easter, who did continue to perform over the years in different bands, focused more on his production career.

This entry was posted in Downloads, Uncategorized and tagged BoJack Horseman, Let's Active. Bookmark the permalink.